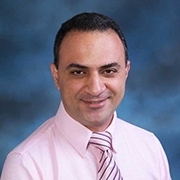 It was back in 1988, when I studied in Grade 9 at a public school in Armenia, when my Geography teacher offered me an opportunity to teach a Grade 6 class. I did not hesitate as I always liked the subject. However, I still remember the stress I experienced when conducting the lesson due to my lack of prior experience and the pressure of teacher observation. That was my first introduction to teaching, at the age of 15. Years spent in education shaped by the interdisciplinary scope of knowledge, and more than two decades of work experience in administrative, managerial and teaching roles have transformed that boy into a dedicated life-long learner and an experienced educator.

Throughout the past decades, I have spent years in a several countries and territories, each being unique in terms of its position in the region or the world. Born in the largest country in the world by landmass (by 1991 Armenia was a part of the former USSR), after the Union broke apart, I found myself in the smallest country in its region – in independent Armenia. Later, when I left the country to study for my master's degree, I acquired life experience in the largest country by the economy – the United States. A move to China in 2005 gave me an experience of living in the largest country by population. Next was Singapore – the smallest country in its region. And now it is Hong Kong, one of the most vibrant cities in the world, where I work as Principal of Secondary and IB Diploma Programme Coordinator at Han Academy, a young school, established in 2017, which is committed to international education with Chinese language and culture at its core. I have worked as the Head of High School and the Coordinator of International Baccalaureate Diploma Programme (IBDP) at Hillside World Academy in Singapore (formerly known as Chinese International School). For more than a decade, I have been teaching Economics under the IB programme, in Beijing and in Singapore, an IGCSE Economics here in Hong Kong. I am holding a University of Cambridge International Diploma for Teachers and Trainers and am an IB examiner for Economics. I have also taught Economics with UK-based Pamoja Education, the only institution teaching the IB online.

With an undergraduate degree in Economics, I have obtained an MBA from the American University of Armenia and, later, my second master's degree in international affairs from Missouri State University in the United States, as a recipient of the Edmund Muskie full graduate scholarship. This formal education has significantly contributed to shaping my professional background, which has been strengthened through my decade-long work at the Armenian Development Bank. I have also created and hosted an educational TV programme on banking and co-authored a comprehensive textbook on banking.

In parallel with my professional career, I have received my doctorate degree from the National University of Singapore, in the area of geopolitics and political geography, and have presented at international conferences. I speak Armenian, English, Russian and Chinese. Having a broad geography of cultures explored, I am a firm believer in Mark Twain's words that "travel is fatal to prejudice, bigotry, and narrow-mindedness."

Education, I believe, should first of all aim to shape values. Furthermore, education should strengthen character and nurture open-minded and knowledgeable thinkers. To guide students is to make them responsible for their own decisions in life. Being in a classroom keeps communication with students alive, reduces the gap between generations, and most of all enables me as a teacher to continue learning from students. Very often I remember that 15-year-old inexperienced boy, who, for the first time, stood in front of a class as a teacher.