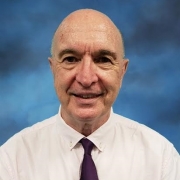 I have a Bachelor of Arts degree with a major in English Literature and minor studies in Journalism and Film and Television. I then completed a Bachelor of Education degree and a Diploma of Teaching.  I also successfully completed the Cambridge RSA (CELTA) course. I have experience as an examiner marking international examinations. I qualified in Australia where I spent ten years teaching in government schools and then a further ten years teaching in private schools. In 1998, my wife and I arrived in Hong Kong. My first teaching job was as a NET teacher. I worked in local schools for eight years and then moved to Yew Chung International School. Initially at YCIS I was a teacher and then became Head of English. I recently worked at ITS Tutorial College teaching English Literature and English.

On becoming a teacher:

After winning a scholarship, I attended a grammar school in England until Form Five. However, my parents decided to migrate to Australia. As the eldest child, in a family of six, I volunteered to leave school and seek employment to assist the family becoming established. My first job was in a department store and then I worked on the Coca Cola truck as a delivery boy. At the age of seventeen I joined the RAAF as a telecommunications operator and then became a cryptographer. I completed six years of service. My next job was in a commercial television station. My role was to co-ordinate between the Programmes department and the Sales department. I was the person who put the advertisements in the programmes. I worked in television for five years. Finally, at the age of 27, I sold my house and went to university. I became an English teacher. It was a long journey, but always my ambition.

Other interests that reflect my personality as a teacher:

I have always been a fanatical football player. At school, I was the person who organised the teams and arranged matches between the forms. This was my first taste of managing people.  I always enjoyed interacting with people of all ages.  Later as my two sons grew, I became a football coach of both junior and senior teams. Again, this helped me realise that everyone has different aspirations, skills and temperament. My teaching style very much focuses on connecting with the individual student through those three key areas.

Memorising my first serious poem, Auden's "The Nightmail", was inspired by Ms. Mason, my Primary 4 teacher.  I have loved poetry ever since.  My English teacher in grammar school, Mr. Parr, also a good footballer, inspired me to love Literature.  I have also worked with some inspirational teachers in my career.

I often think: "What would an exceptional person do in this situation?"  I try to follow that philosophy. I don't always succeed, but I keep trying.